San Francisco is a city in California. It also happens to be its own county. The city is the namesake of Saint Francis of Assisi, a 13th-century Italian Catholic friar. With a population of over 870,000 residents, San Francisco is California’s fourth-largest community. Some of this city’s famous features include the Golden Gate Bridge and Alcatraz Island, a prison turned museum.

San Francisco possesses several nicknames with some of the ones being the Golden City, Bay City, and Fog City. Other intriguing aspects of this city are its historic buildings. Many of its architecture dates back to before World War II. This city is also known for its steep streets, which should make cycling an interesting experience for you. Speaking of transportation, it’s common for most of the locals here to utilize sources of public transportation like subways and cable cars. Many people also walk to work since it’s one of the most walkable cities in the country. If you have a taste for art, history, or science, there are more than enough venues in the city to cater to that. There’s the War Memorial Opera House, home to the San Francisco Opera. The San Francisco Museum of Modern Art showcases both vintage and modern art and receives over 600,000 visitors per year. The California Academy of Sciences houses the Steinhart Aquarium and the Morrison Planetarium. This city offers something for sports fans, too. You can watch the San Francisco Giants play baseball at AT&T Park or the San Francisco Dons play games at the University of San Francisco. Public schools in San Francisco are operated by the San Francisco Unified School District. It also has several private schools and post-secondary institutions.

About 47 percent of real estate properties in San Francisco is made up of apartment complexes. Other types of homes in San Francisco include mobile homes, townhomes, single-family homes, and small apartment buildings. San Francisco homes for sale have an average of two bedrooms, and many of them were built before 1939. Make the decision to move to San Francisco. This city is historic, artsy, and walkable.

Extremely desirable Richmond District Location, this well maintained triplex is waiting for its new owner. There are two 1 bedroom 1 bathroom units which have both been ...

Enjoy the sunsets and amazing views of the shores of Lake Merced and TPC Harding Park Golf Course from this rare split level home in a prime Lakeshore location. One of a ...

Picture yourself living in a like-new construction home in Western Addition. This three-story home is truly made for everyday living, with plenty of indoor space. Enjoy a...

This classic mid-century home presents an incredible opportunity in the heart of San Francisco! Nestled in the hills above the charming Portola neighborhood, this move-in...

Beautiful New Building completed in 2020 in Prime Marina Location. This 2 Bed 2 Bath home has a rare private patio located in the back of the building and is a minute's s...

This sweet little house is 72 years old and is ready for the makeover that will make her YOUR home! She is being sold AS-IS so you will have the opportunity to add the fi...

Newly updated 4th floor condo in a beautiful art deco building. Spacious and light 1 bed, 1 bath unit with a large room off of the living room that can be used as a seco...

Welcome to this beautiful single family Edwardian home built in 1916. The homes main level features the living room with built-ins and a decorative fireplace. The large f...

Prepare to fall in love with this rare & unique offering. Not on market in 28 years. Located in one of the sunniest SF neighborhoods & situated on a tree lined street wit...

Storefront Retail/Residential property, located in the Southern City Submarket of San Francisco. This 4,338 SF Mixed Use Building is conveniently located across the stre...

The modern oversized 1 bedroom with office den/2 full bathrooms condo located at the prime San Francisco location. The office den can be easily converted to the 2nd bedro...

Ideally located in the stylish and sophisticated Rockwell building, this one bedroom one bath condo has everything you need for a luxurious urban living experience. This ...

This rarely available mid-century-modern top level loft Townhome is breathtaking with its panoramic views from Twin Peaks, to the City of SF,and beyond. Incredible volume...

In a special city like San Francisco where extraordinary properties are subtly sprinkled amongst the mundane, few condos will ever stand out as this masterful, architectu...

Amazing Bay Bridge and water views! Feel as if you're relaxing in Miami Beach as you find tranquility inside this upgraded, natural light filled, 2bd, 2 full bath home si... 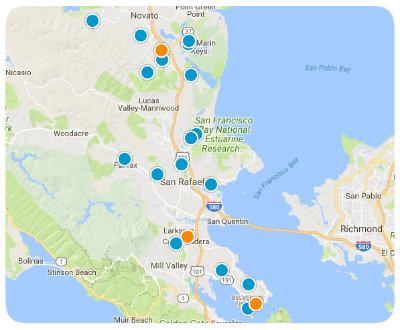